Today was an extremely busy day with lots of things to mention.

I was strolling through the hall today and bumped into Congressman Jason Chaffetz.  I stopped and we had a good conversation about immigration before he had to run off to another meeting.  Special thanks to a stranger in the hall for taking this photo with my Blackberry. 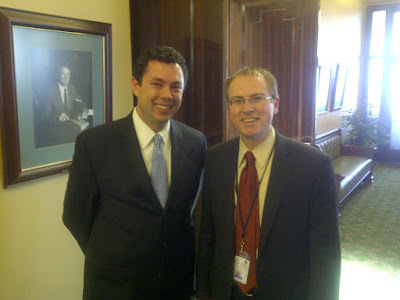 Also on the docket today was HB 116 another much anticipated immigration bill that is very much of the same design as our SB 60.  In fact, if you compare the bills side by side, they employ nearly the exact same concepts except that SB 60 has most of the details of the program spelled out where HB 116 is a platform for fleshing out detail at a later date.  I spoke very briefly in favor of the bill as it dovetails with our efforts.  To my pleasant surprise, many of my colleagues spoke in favor of this type of approach.  If you are up at 1am and have nothing better to do, you can watch the 2 hour floor date HERE. 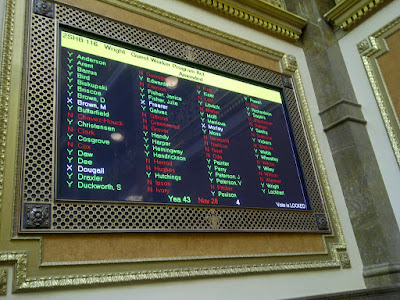 In the end, the vote was favorable and the bill passed 43-28.

After floor voting time, I headed to the Senate Judiciary committee to speak in favor of our SB 60.  The committee was small with only two senators present to get started.  Toward the end of the meeting, three other senators arrived...just in time to cast their votes.  You can listen to the meeting, which includes my introductory comments at 10:00 minutes HERE. My comments are immediately followed by Attorney General Mark Shurtleff.  This was a very good meeting with great testimony.  The committee voted 3-2 to pass the bill to the Senate Floor for a vote. 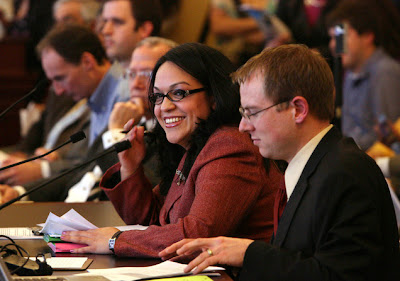 You can read the Salt Lake Tribune article on the meeting HERE.
Posted by Jeremy Peterson at 8:19 PM