Today I presented my proposal to have Utah join the National Popular Vote Interstate Compact at the Government Operations Interim Committee.

Here is video of the powerpoint presentation with audio from my remarks and the committees questions:


The bill will be heard again at the Government Operations Standing Committee in the up coming 2018 General Session.

WINNER TAKE ALL: Mormon Missouri Expulsion and the Electoral College

In 1820, Missouri and and Maine entered the Union under the auspices of the Missouri Compromise.  Maine was admitted as a free state and Missouri was admitted as a slave state.  Through the compromise, the precarious balance of power between the North and South was maintained for a little longer.

Eleven years later, in the summer of 1831, Mormon settlers began to migrate from Ohio to Jackson County, Missouri to establish a new center of Mormon life.  The territory was untamed and on the frontier. Life was hard.  Nevertheless, the group worked diligently to improve their land and livelihoods.

Unfortunately, their presence was not appreciated by other locals who took a dim view on their new religious neighbors.  With Missouri being a slave state, anti-slavery sentiments among the Mormons proved to be a potential threat to slaveholders.  The large Mormon presence threatened to upset the political balance that supported Missouri as slave state.

Settler agitation against their Mormon neighbors began in earnest in 1833.  A local paper in Independence, MO published a letter signed by community leaders.  Here are their unbelievable words:


Clearly, the settlers of Jackson County had little tolerance for their religiously enthused neighbors.

After tensions mounted and the Mormons abandoned their settlements to relocate in Clay County, the Missouri Legislature created two new counties for the Mormons to reside.  Caldwell and Daviess Counties were created as safe havens for Mormons to segregate themselves from the rest of the state.  The settlements quickly filled to overflowing and Mormon settlers spilled into surrounding areas.  Lands were purchased in surrounding counties and tension again began to rise.  Tensions erupted into violence including Mormon youth and prisoners killed at the Haun's Mill Massacre.


The result of the extermination order was swift.  General Clark surrounded the largest Mormon settlement of Far West and laid it under siege.  Mormon settlers capitulated.  Terms were issued giving the Mormons until Spring to leave the state or face a slaughter.  Rather than waiting, the Mormons abandoned their settlements that winter and left for Illinois.

The material losses were enormous.  The 12,000 Mormons left behind their land, their homes, and their possessions.  Estimates of financial losses in today's money is around $25 million. 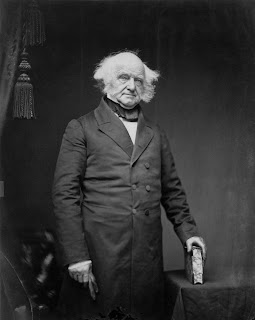 After the exodus, Joseph Smith, the president of the church, traveled to Washington D.C. to seek redress for the abuses the Mormons had experienced.  Considering their rights to life, liberty, and the pursuit of happiness to have been trodden down, he took the grievances of the Mormon people to the highest level.  Joseph met with President Van Buren to plead for justice.  After hearing the issue Van Buren's response was stunning.  There are two quotes attributed to his retort upon hearing of the Mormon's deprivations in Missouri:

"What can I do? I can do nothing for you, -if I do anything, I shall come in contact with the whole State of Missouri."


"Your cause is just, but I can do nothing for you; if I take up for you, I shall lose the vote of Missouri."


His words (whichever quote you chose) is stunning.  We read the words of a calculating politician who is weighing his electoral chances in the run up to an election year.  In 1839, Missouri held four electoral votes in the Electoral College.  The state also awarded those votes based on a winner-take-all system that Utah and 48 other states still employ today.  President Van Buren figured that he would lose all of Missouri's electoral college votes if he helped the Mormons.  That was simply too much to ask.

In the end, the result was truly winner-take-all:  The mobs took all of the Mormon's wealth and Van Buren took all of Missouri's electoral votes in the 1840 election.

Thus, we see yet another example of how our current winner-take-all electoral college system produces distorted (and in this case grossly unjust) outcomes based on the rules for electing our President.  You can learn more about my proposed solution to this problem.
Posted by Jeremy Peterson at 12:26 PM 3 comments: 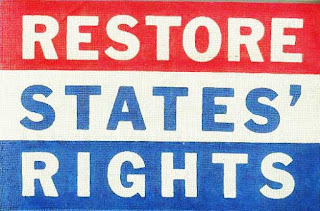 Federalism, the 10th Amendment, and State's Rights are all subjects near and dear to my heart.  Having observed the course of business in our national capitol and its propensity for one-size-fits-all policy, I recognize the great wisdom our Founder's showed when they ordained the separate states as laboratories of democracy.  So, it is with great regret that I watch as national policy is drafted that pleases a few but runs counter to the will and best interests of other various states.  Such a process is not only insensitive, but also completely unnecessary.

Presently, national directives are dictated by the great policy making exercise that occurs every four years: the Presidential Election.  It is during this great exercise in political showmanship that promises are made and deals struck by candidates to assure their ascendance to power.  If the right agreements are made with enough of the right people, the candidate prevails and becomes our head of state.

We witnessed this in President Trump's surprising victory in November.  He defied conventional political wisdom by wooing Rust Belt Democrats to his cause and blurring the traditional party lines.  In order to secure the support of these voters, it was required to strike a deal with the trade unions to promote a trade policy that encourages U.S. manufacturing.  This policy would involve tariffs, regulations, and potential trade wars with other countries.  While a trade war would be good for Ohio and Pennsylvania, it would not be good for Utah which is an export state. 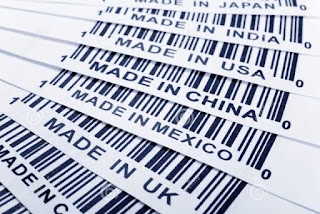 Which begs the question, why would such a bargain be struck to gain support of the Rust Belt states in the first place?  Well, as it turns out, states like Pennsylvania and Ohio are swing states.  Like Colorado, Nevada, Florida, Virginia, and North Carolina, the margins of support in the 2016 election were too close to call before election day to know if the state would throw its Electoral College votes to a candidate of either party.  The reason this electoral uncertainty is important is because nearly all the states in the country, except Nebraska and Maine, have pledged their Electoral College votes to the candidate who wins the state popular vote. 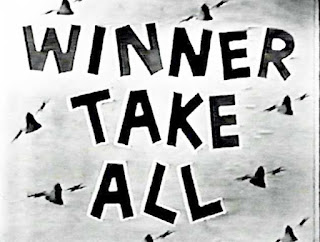 This winner-take-all policy has in turn created battleground states who gain all the attention during presidential elections. Meanwhile, the remaining states, like Utah, sit on the benches and watch as national policy is crafted based on the needs and desires of these all-important battleground states. The spectator states are left wanting.

To offer some examples, let's look at two of the most partisan issues that have risen in recent Utah memory: Public Lands and Medicaid Expansion.  Regarding Medicaid Expansion, Utah, like most states, applied for Federal waivers to the program.  The waivers would have exempted Utah from some parts of the law to help the program better fit with what local political leaders felt would work in the state.  Our request was outright rejected.  Meanwhile, Florida, a battleground state, received their Federal waiver and was able to move forward with the program.  Had the Federal government been willing to accommodate Utah's specific needs, the acrimonious debate on Medicaid expansion would probably have been much more subdued.

The other issue vexing Utah is how we manage our public lands.  With over 60% of the land in our state being owned and managed by the Federal Government, we have a strong interest in making sure that management is being handled properly.  Many rural communities depend on that stewardship being treated seriously.  With the Federal Government having such a large footprint in the state, problems are bound to surface.  When they do, Utah has petitioned the Federal Government to resolve the conflicts.  Unfortunately, few of our requests are granted.  Meanwhile, Colorado, who also has a large amount of Federally owned public land, has most of their public lands conflicts resolved.  Is it merely a coincidence that Colorado is also a battleground state?  It is not.

So, how does Utah reassert its rights as a state and engage in the national policy discussion?  The answer is the National Popular Vote Interstate Compact.  By forcing Presidential Candidates to consider the needs of all the voters in all of the States, the policy outcomes will be more even-handed.  Given the diverse perspectives and needs of each state, candidates would be forced to promise policy that would accommodate large swaths of the country rather than specific niches.  Spectator states, like Utah, would become proportionally relevant again to the policy discussion and improve the likelihood that their grievances are heard.

I hope you can join me in supporting the National Popular Vote Interstate Compact.  Utah deserves to have a seat at the Federal policy table.  I look forward to presenting this exciting policy initiative in the 2018 General Session.

Posted by Jeremy Peterson at 11:54 AM No comments: