I had the privileged of meeting with Steve Thompson of A.B.A.T.E. today and they were kind enough to contribute to our campaign.  Here is a photo from our meeting today: 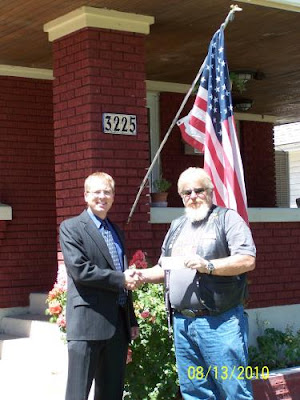 They also got video of me talking about my thoughts on helmet laws.  To watch follow this link:


JEREMY ON HELMET LAWS
Thanks again to A.B.A.T.E. for their support.  Let's make a difference this year!
Posted by Jeremy Peterson at 9:03 PM No comments:

Adam Smith: Quotes for Our Day 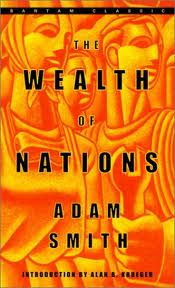 I recently finished reading Adam Smith's epic the Wealth of Nations.  For those of you looking for a great read, I highly recommend you pick up a copy.  As an economic genius, Smith lays out the mechanics of how the world works.  He touches on taxes, the military, progress from barbarism to civilization, banking, feudal history, public education, currency manipulation, housing and many many more intriguing topics.  I took copious notes and I thought I would share some great quotes based on topic:

"Capitals are increased by parsimony and diminished by prodigality and misconduct."

"...every prodigal appears to be a public enemy, every frugal man a public benefactor."

"Every increase or diminution of capital therefore, naturally tends to increase or diminish the real quantity of industry, the number of productive hands,...the real wealth and revenue of all its inhabitants."

"All for ourselves, and nothing for other people, seems, in every age of the world, to have been the vile maxim of the masters of mankind."

"The qualifications of the body, unless supported by those of the mind, can give little authority in any period of society."

"The qualifications of the mind can alone give very great authority.  They are however, invisible qualities; always disputable and generally disputed."

"In the progress of despotism, the authority of the executive power gradually absorbs that of every other power in the state, and assumes to itself the management of every branch of revenue which is destined for any public purpose."

"The sovereign is completely discharged from a duty, in the attempting to perform which he must always be exposed to the innumerable delusions, and for the proper performance of which no human wisdom or knowledge could ever be sufficient; the duty of superintending the industry of a private people."

"To prohibit a great people, however, from making all that they can of every part of their own produce, or from employing their stock and industry in the way that they judge most advantageous to them selves, is a manifest violation of the most sacred rights of mankind."

"Plenty of good land, and liberty to manage their own affairs their own way, seem to be the two great causes of the prosperity of all new colonies."

"The taxes upon the necessities of life have nearly the same effect upon the circumstances of the people as a poor soil and a bad climate."

"The middling and superior ranks of people, if they understood their own interest, ought always to oppose all taxes upon the necessities of life, as well as all direct taxes upon the wages of labor."

"When the diminution of revenue is the effect of diminution of consumption, there can be but one remedy, and that is lowering of the tax."

"To relieve the present exigency is always the object which principally interests those immediately concerned in the administration of public affairs.  The future liberation of the public revenue, they leave to the care of posterity."

There are many many more but I will leave them for you to discover.  These last two quotes come near the end of the book and are chilling given our current circumstances in regards to our national debt.

Note: the "liberation of public revenue" means to pay off the debt entirely.  A "pretended payment" is 18th century speak for a government printing money to pay its bills...i.e. inflation.
Posted by Jeremy Peterson at 5:57 PM No comments: