After last week's beating, this week has been quite pleasant thus far.

On Tuesday, the Juvenile Fingerprints bill (HB48) that I sponsored was passed out of committee finally and will be heard on the House Floor in the next couple of days.  You can hear the final committee meeting HERE.

This morning I presented our immigration bill S.B. 60 to the Conservative Caucus along with my other colleagues who presented their competing legislation. It was a very lively debate.  One of my colleagues got down right testy and openly bad mouthed other competing bills.  It was difficult to hold my tongue as he chose to use inflammatory rhetoric to make his case.  In the end, I felt that his tone and railing accusations were best left to speak for themselves.

One of the big items we released today was the  fiscal note for S.B. 60.  Based on projections, we estimate that our immigration program will generate about $12 Million in new tax revenue after expenses each year.  Here is a summary of those projections: 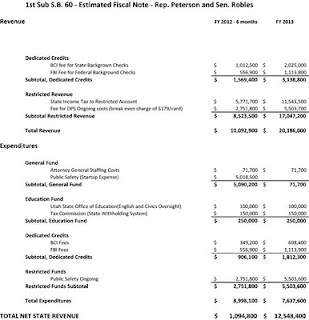 Another interesting item today was my attempt to open a bill file on the House Floor.  The rules state that a bill cannot be opened this late in the session without a majority of the members of the House consenting.  You can see the short video of my effort HERE.

Finally, the USA Today ran a nice article on our bill as well.  Click to read.
Posted by Jeremy Peterson at 9:25 PM