This week was short due to President's Day Holiday but there were some notable events. 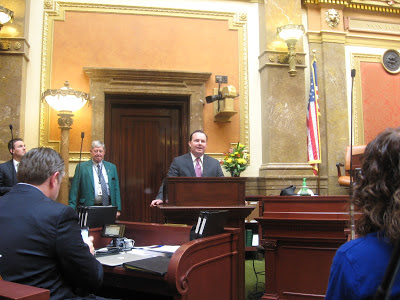 On Tuesday, Senator Mike Lee came and spoke to us.  He answered questions on immigration and where he stood on the Federal level proposals.

Also, we finally mopped up our HB-70 Railroad Museum Authority drama on the House Floor.  On Friday last week we experienced some confusion regarding how the Senate had amended the bill.  I pushed the pause button to keep the bill from failing amid the confusion and tried to tie up all the misunderstanding.  It would be best to watch Friday's video of the drama and then watch Tuesday's follow up.  Speaker Lockhart jokingly questioned my math skills to which I blamed Common Core Standards, only to have the House take the opportunity to throw in some tongue-in-cheek criticisms of their own. WATCH TUESDAY'S VIDEO HERE. 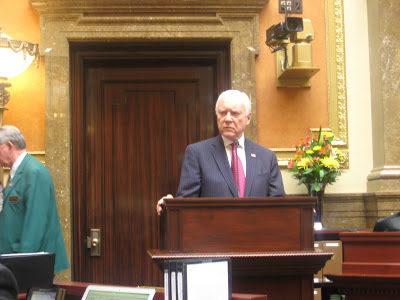 On Wednesday, Senator Orrin Hatch came to visit us.  He gave a two minute presentation then opened the Floor to questions.  I asked him about immigration and how it seemed the proposal on the table now echoes 1986's "Amnesty" but that this time a Republican House may want to fund enforcement provisions that were left unfunded by a Democratic House then.  That unfunding of enforcement provisions, by the way, is why it was considered a such an abysmal failure by all sides.  WATCH VIDEO OF SEN. HATCH'S SPEECH AND MY QUESTION.

One of the important issues Hatch also spoke about was Sequestration and how 11,200 employees at Hill Air Force Base may face a 10% pay cut starting April 1st.  This is a huge issue that will impact District 9 and surrounding areas immensely.  More to come on this subject....

On Thursday, I had the opportunity to present SB 53 - Intergenerational Welfare Reform.  This is a coup for Utah.  Currently we have our Departments of Government all working on poverty issues independently.  This bill requires our heads of Departments to coordinate quarterly and provide policy guidance and insight to help us eliminate intergenerational poverty.  Here is a brief fact sheet: 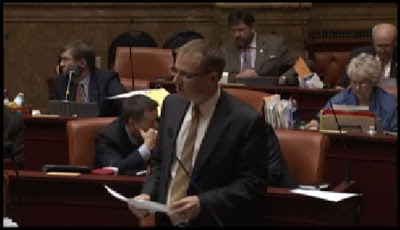 The legislation is so good that the Federal Government is looking at it to see if they might be able to benefit from our model.  We have 7 State departments involved in welfare assistance, the Feds have 37.  This bill will have an impact on how over $3 BILLION of your tax dollars are spent just at the State level.  Based on the reports we get this summer, we will start running bills next year to make meaningful changes to our welfare assistance programs.

Thursday evening was wrapped up with the honor of serving as Master of Ceremonies for our annual Speaker's Dinner which is a private gathering of all the House of Representatives and their spouses to socialize, relax, and here from the Speaker of the House. NOTE: This event is privately paid for by the Legislators.  No public money or lobby money is involved.

Friday was the day we honor those in Utah who serve in our Armed Forces. 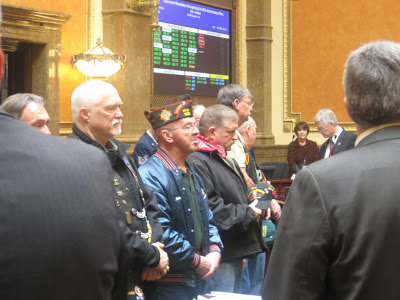 First, we commemorated the 50th Anniversary of U.S. involvement in Vietnam and the war's Veterans.  It was an emotional presentation. 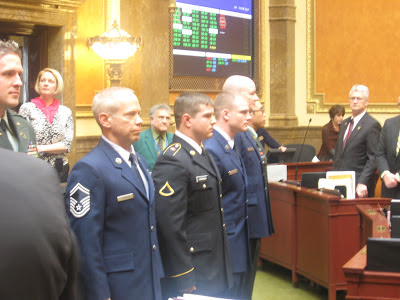 Then, we honored those who are currently serving in our Armed Forces.  We were glad to report that there were no fatalities in any of the units from Utah serving.  This is the first time in many years that this has been the case.  Representative Ryan Wilcox (R - North Ogden/Pleasant View) and his Mother sang the last verse of the Star Spangled Banner and followed by the whole House singing God Bless America.  It was very touching.

I was also grateful that my daughter Wynnie was able to join me on the Floor and see these events first hand. 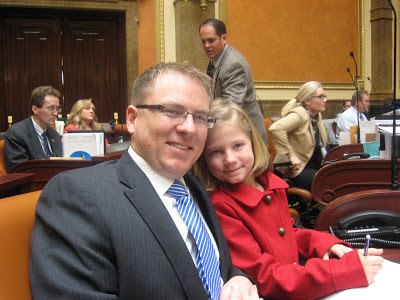 Posted by Jeremy Peterson at 5:09 PM